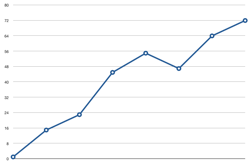 A comment from thinks reader Robin the other day asked how to measure adoption of a new program. In fact, Robin’s comment gets to the heart of the matter for many people new to online marketing: how do you choose the right metric for your marketing efforts? While thinks has looked at the keys to successful web metrics before, today we’re going to take a look at one specific case for how to build the right metrics for your marketing.

First, you’ve got to start with the business goal. A metric unrelated to your business goal is, put simply, useless. In this case, the goal was to compare the effectiveness of print and outdoor advertising (billboards, mostly) among specific demographic segments in several markets. This might sound complex, but it’s really asking some very simple questions:

So, we were trying to count:

That outline provided the basis for the metrics we’d develop. Anything that didn’t measure those three factors didn’t matter. Here’s what we did.

First, we started with how to count the number of people who saw the advertising. In this case, we were marketing to Spanish-speaking customers, which required us to develop a unique Spanish-language landing page. Since we wanted to ensure the page design didn’t influence results, we knew all traffic would have to go to the same page. There are ways to track the influence of those differences, but for a limited duration, low budget test, that was overkill.

If we wanted to know how often those people came, we could look at visits to the page or possibly page views. But our goal was to see how many people we reached. The best metric to track the number of people you reach is unique visitor counts. As you’re about to see, it won’t tell you everything. But it will start you on the right path. Since the test was due to run for several months, and since we knew our typical sales window was three weeks, we decided tracking monthly unique visitors provided the best picture. Weekly or daily counts would have been too short and over-counted traffic. Quarterly or annual counts would have been too long a period and under-counted the results. Just like Goldilocks’ porridge, monthly was just right.

But deciding on unique visitor counts was just the starting point. Since the media would appear in both print and outdoor, we wanted to segment the customers to see which type of media drove traffic. Even though all traffic was going to the same landing page, there’s no need to use the same URL for both. In fact, using different URL’s allowed us to track where customers saw the media. We opted to use a “vanity URL” – a domain name specific to the campaign – each place we ran media, one for print, another for billboards.

While there is nothing wrong with using URL’s like www.example.com/media1 and www.example.com/media2 in your marketing – and there are many good reasons to do so – in this case there was value in having distinct domains for each media channel. First, the campaign was in Spanish. We felt having the domain name appear as www.ejemplo.com (that’s “example” in Spanish) was more likely to reassure our customers than www.example.com/página. Second, we wanted to know whether billboards or print were driving the traffic. Customers who saw our brand may have simply gone to our traditional domain. That’s almost always a Good Thing, but for purposes of this test, wouldn’t tell us what we wanted to know. Keeping the domains custom and exclusive to the media type increased the likelihood that the customer had seen, and was reacting to, that specific medium. So, by using the URL ejemplo-uno.com (not the actual domain) for billboards and ejemplo-dos.com in print media, we could then track which medium the customer had seen. This changed our metric to monthly unique visitors by typed/referred domain.

At this point, we had enough information to begin tracking how many people acted on the ads. But awareness isn’t a goal. Revenue is. Tomorrow, we’ll take a look at how the team was able to track the efficiency of the different media types and how that grew revenues.