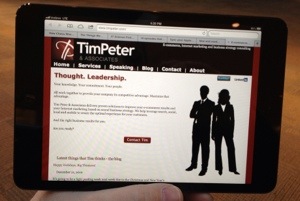 I finally got my hands on an Apple iPad Mini.

I’ve had an original iPad since shortly after they first came out and, as much as I loved it, it’s feeling its age. The new iPad mini offers improved functionality, runs iOS 6 (the original iPad can’t upgrade past iOS 5.1.1), adds still/video cameras, and comes in a sleek, lightweight form factor.

A few words of caution. I’m not going to compare the iPad mini to other tablets on the market much. I don’t have access to those devices and can’t make a fair “apples-to-apples” comparison (no pun intended). I will say that I opted for the mini for one main reason: I already use a Mac and an iPhone. I create many presentations in Keynote (though also live in MS Word, Excel and Google Chrome for huge chunks of my day). I use iCloud to share photos and presentations across my devices. In other words, I depend on Apple’s ecosystem pretty heavily. If you want to call me a “fan-boy,” I won’t argue (it’s not accurate, it’s not worth fighting about though). I was an early Android user, switched to the iPhone a couple years ago and have stuck with iOS. Keep in mind that every penny I spend on gear could also be invested in other areas of my business. I may like Apple products. But I like getting value for my dollar more.

So, how does the iPad mini stack up? Well, here are my initial thought after a few days of regular use.

Do I like the iPad mini? No. I love it. It does exactly what I need it to do, integrates seamlessly into my work and life, and replaces a long-standing core tool (my old iPad). Sure, if you’re an Android user, you might prefer alternatives. But if you’re already living in Apple’s ecosystem and need/want a 7″ tablet, grab an iPad Mini

If you can help those dealing with the after-effects of Hurricane Sandy, please visit the American Red Cross.

Want to make sure your business makes the most of the local, mobile, social web? thinks helps you understand how to grow your business via the web, every day. Get more than just news. Get understanding. Add thinks to your feed reader today.