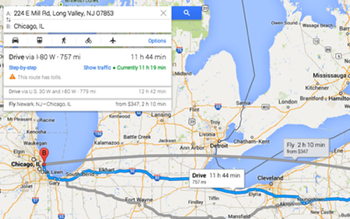 For the last couple of weeks, I’ve been talking about how search is changing and how those changes will change your customers’ behavior. And there’s no doubt that Apple, Google, Facebook, Amazon, and Microsoft (or AGFAM) continue to craft their products and services around your customers’ needs in this changing social, local, mobile context.

So, what has that got to do with travel?

One of the biggest shifts in travel marketing over the last handful of years has been the rise of metasearch companies, folks like Kayak (now owned by Priceline), Trivago (now owned by Expedia), Hipmunk, and TripAdvisor searching the various online travel agencies (OTA’s) and supplier sites to find consumers the best deal.

Well, Google dropped a big bomb on the world of metasearch today. Not that we haven’t known it was coming, but, it’s still impressive to see in the real world.

What is this change? Google Maps has introduced its own “metasearch” capabilities and now displays prices for flights on various routes. Check out the following to get a sense of what it looks like in practice: 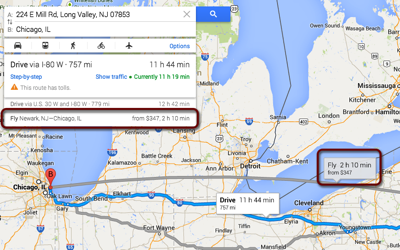 This is, as Alex Kremer notes on Tnooz, a very big deal. It is, in fact, a game-changer.

Now, some very thoughtful commenters on Kremer’s article (notably Evan Konwiser and John Pope) explain why this may not be as big a deal as Kremer and I think it is. I just happen to respectfully disagree with them.

Why? Here are 4 reasons why Google could win this one:

Let’s get the most obvious argument out of the way right up front. With all due respect to Kayak, Hipmunk, and others, metasearch (as we’ve known it to date) still represents a modest proportion of search traffic for most travel companies. According to the New York Times, Kayak’s ranked as the eighth most popular travel site prior to its acquisition, receiving less than half the traffic of the top players (Trivago and Hipmunk are considerably smaller).

While metasearch continues to grow in popularity, adding flight search (and, I suspect over time), Hotel Finder into Google Maps will increase consumers’ exposure to metasearch as a concept. Dramatically.

For instance, according to MarketingLand and comScore, Google Maps’ mobile app alone gets 2-3 times the traffic of the biggest travel sites, without including desktop traffic (though, to be fair, some of that would likely be duplicated across desktop and mobile). Add improved exposure for Kayak and Trivago through their new parent sites, plus TripAdvisor’s move towards metasearch and the category as a whole stands to gain. Including, of course, Google Maps. But Maps starts from a much larger base.

2. The “People Don’t Search for Travel on Maps” Argument

Define “travel.” I think it’s certainly true that people don’t search for flights on Google Maps. At least prior to today, why would they?

But once early adopters begin to gain the advantages metasearch has long promised, why wouldn’t savvy travelers search for flights on Google Maps? Don’t forget, not all that long ago AltaVista and Overture represented a significantly more popular search engine and paid ad network, respectively (ironically, both services now belong to Yahoo). Yet somehow, Larry, Sergey, and company managed to become the dominant player in both spaces. Not that long ago, Expedia was the dominant online travel agency. But both Booking.com and TripAdvisor have made serious inroads into their position.

And while Google itself is equally subject to disruption, the whole point of disruptive technologies is that they upend the status quo. Right now, the status quo in metasearch (and travel shopping generally), belongs in part to sites other than Google. This move by Big G simply positions them more effectively as part of the conversation.

Finally, I think the real metasearch opportunity will come once Google includes hotel data into Maps. It would be tough to argue that anyone owns the drive market online and even tougher to argue that segment doesn’t use Maps. While it’s too soon to say the advantage falls completely Google’s way, I don’t see an argument that excludes them from the conversation either.

Hat tip to John Pope for suggesting this one, noting Google,

I’ll come back to one of the “many reasons” in just a moment (it’s the next entry in this piece). And let’s ignore whether Google is innovative (I think that’s both self-evident and, as I’m about to argue, largely irrelevant). Alex Kremer points to Google’s 20 billion page views and that’s surely something worth noting. But, let’s focus in particular on something arguably more important than any of those: execution.

A moment ago, I pointed out Overture, Google’s long-ago, mostly dead rival in paid advertising. Overture argued that Google’s AdWords infringed Overture patents and the companies settled the dispute. Without arguing the merits of the suit, let’s use that settlement as an acknowledgement that Overture was more innovative. If that’s the case, why didn’t they win? Why didn’t innovation carry the day?

Well, according to the write-up at the time (and my own memory), “In turning a blind eye to Web search during the Internet heyday and by licensing and promoting Google’s technology, Yahoo inadvertently helped the company become the No. 1 search provider.”

Google may fail to execute. Or its metasearch competitors may execute more effectively. But travel is a mature enough market that success comes as much from solid execution as pure innovation. For instance, Skift recently highlighted Hipmunk, noting:

“Hipmunk has garnered stellar reviews from the tech press and users for its attractive UI, ease of use, and its iOS and Android apps from their beginnings.

Recent initiatives include a revamp of Hipmunk’s mobile apps, and the option to book on Hipmunk (via Expedia in the background) instead of having to navigate away from Hipmunk and over to hotel and online travel agency sites. The mobile app for the first time features plenty of other online travel agency booking partners beyond Orbitz.

Almost everything Hipmunk does, from its flight and hotel search UIs, to its mobile apps, is pretty.”

I’m not saying “pretty” can’t be innovative (and, in fact, I’m a big fan of some of Hipmunk’s innovations). However, I am saying that “attractive UI, ease of use, and [mobile] apps” aren’t exactly bleeding edge concepts. Hipmunk’s doing well because they’re doing it right. Similarly, with $50 billion in cash on hand to buy (or settle with) any tech companies they want, Google doesn’t need to innovate in metasearch. They just need to execute.

The other area John Pope mentioned in his comment limiting Google’s effectiveness is antitrust. I don’t see it. While no one can adequately predict what any given government entity is going to do, here’s what we do know:

I’m no Google apologist on this one, having encouraged people to pay attention to Big G’s antitrust woes for years. But in this case, I simply don’t see an issue. (Obviously, I welcome contrary points of view in the comments).

Of course, just because I think Google benefits in many of these categories, I don’t know that this will change the game overnight. I’ve already argued that metasearch remains outside the mainstream of travel search, despite having been around for almost a decade. I do think the exposure Google provides for the category may change that reality, but it’s possible we’re still a few years from seeing any meaningful shift. I’d love your thoughts. Feel free to take my (decidedly unscientific) poll here and let me know what you think:

Whew, that was a lot to get through, eh? It’s pretty clear I think offering flight search (and, eventually hotel search) in Maps is a game-changer. No one dominates metasearch, consumers do search for travel on Maps (or at least will in the future assuming they’re offered good value), Google is plenty innovative and consistently executes, and, in all likelihood, isn’t worried about antitrust intervention. While it’s early days for this offering, I’d be very surprised if it didn’t represent just another step in Google’s journey as a travel company. And I don’t think they need a map to see where to go next.

Interested in learning more about travel marketing and where it’s going — as well as lessons that apply to a host of other industries? Register to receive a special report I’ve produced in conjunction with hotel marketing firm Vizergy, “Digital Hotel Marketing in a Multiscreen World.” You can get your free copy of the report here or use the form below to receive yours today.

And you might also enjoy some of our past coverage of these changes, including: