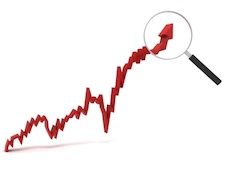 Himanshu raises a number of excellent points in his post and I agree with his basic approach more than I disagree.

The Benefits of Conversion Volume Optimization

So, that’s all great, isn’t it? Keep moving along… nothing to see here, right?

The Problems with Conversion Volume Optimization

Conversion volume optimization makes complete sense as one part of the story, but for most e-commerce sites, it’s not the whole story. Here’s a look at real-world, highly seasonal traffic data from one of my clients that helps illustrate the issue (with their approval, of course. I’ve modified some data to maintain client anonymity):

At different times of the year, not only did traffic and sales vary wildly, but so did conversion rate. Visitors in Q3, for instance, were significantly less likely to purchase than at other times during the year but traffic was dramatically higher.

Now, let’s look at what happened the next year:

Here’s the net change in the traffic and conversion numbers year-on-year (YOY) as values:

And here’s the change in traffic, conversion and conversion rate YOY as percentages:

My big problem with purely optimizing volumes is when traffic varies (both seasonally and annually) as much as it does in this (fairly representative, in my experience) example. First, note that traffic went up 17% year-on-year. Looking solely at Q1, the site in question got 10,000 more conversions, despite the fact that nothing on the site worked better than it had the year prior (most of the increase came from greater market demand YOY, plus some some additional budget for paid search).

Now, most businesses would be thrilled with the 19.2% increase in volumes seen in Q1. Any web team who set their targets at 10,000 conversions would have delivered.

And they would have left money on the table.

In the example data above, you’ll get a 17% lift in conversions for the year without doing much work beyond riding the traffic wave. But, what happens when traffic declines like many businesses saw in 2009 after the housing market collapse or as seen in the seasonal shift from Q1 to Q2? If you’re not working to convert a higher ratio of site visitors, in addition to pure volume targets, you’re going to lose share to your competition.

Looking at just conversion volumes is a little like asking the doctor to check your weight, but not your blood pressure. Sure, losing a couple of excess pounds is probably a good thing. But if your blood pressure doesn’t go down, you’re still at risk of a heart attack. No one number tells the whole story (which, to be fair, was part of Himanshu’s point, too).

In the example shown, we worked to grow both sales and traffic, but to also grow sales at a faster pace by improving site experience and calls-to-action. By increasing conversion rate, as well as the actual number of conversions, we picked up roughly 18,600 transactions that would have been left on the table if we’d only focused on growing conversion volume through more traffic.

Additionally, conversion rate optimization is often a gift that keeps on giving. Your annualized conversion rate increase typically carries over to the next year, on top of any traffic increases or additional conversion enhancements you might try.

So, I agree with Himanshu that your web team ought to have targets based on real volumes. But they also ought to have targets for traffic, conversion rate and a host of other metrics. I’d recommend you take a look at my Website Analytics Fundamentals Series for more ideas on how to set that up for your business.

I’ve also looked at a couple of additional arguments about CRO made in the original post and in the comments below in more detail here. But, today certainly covered the big issue with CVO vs. CRO. Stay tuned for more.