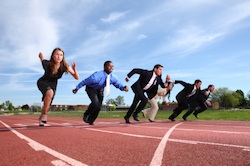 Every year during the SuperBowl, I engage in a Twitter chat with a group of folks reviewing the ads as they happen (usually under the hashtag #BrandBowl or #AdBowl). And a couple of years ago, I noticed some best practices for ads that really connect with audiences. In 2013, not much has changed.

At least, not in terms of telling a brand story. The usual suspects did what was expected of them (Chrysler’s Ram Truck division, in particular did an amazing job; GoDaddy, as ever, illustrated why they’re so strongly disliked and why I dropped them from my roster of recommended firms).

But, shortly after halftime, something amazing happened. The power went out at the SuperBowl. No, really. The lights went out (a trend I worry we’re going to see lots more of over time). The announcers couldn’t announce and the stadium went partly dark.

Now, ignoring the obvious infrastructure concern for a moment, that’s when something really cool happened.

Power out? No problem. twitter.com/Oreo/status/29…

How cool is that?

Yes, those of us on Twitter last night witnessed the birth of truly agile advertising. Buzzfeed has a great write-up of how it happened, but the net takeaway is that the brand and its agency were working together last night to monitor reaction to their SuperBowl ad and were well-positioned to take advantage of an opportunity.

So, Oreo knew the lights were out during the game, created a pithy new message that showed the brand and its story in a favorable light (see what I did there?), while Popcorn Factory couldn’t figure out who won the game (it was the Baltimore Ravens, by the way).

If you’re interested in seeing folks do more of what they’ve always done, you can watch all the commercials here.

But I wouldn’t spend much time on it.

Instead, compare Oreo’s tweet to Popcorn Factory’s email. One of these brands illustrated agile marketing brilliantly, responding in real time to its customers needs (in this case, something to do while waiting for the game to restart), while the other crafted one message regardless of outcome and then executed really poorly (and, I’m betting, pissed off their customers who are San Francisco 49ers fans to boot).

Seth Godin wrote today why the SuperBowl is such a big deal and why we’re unlikely to see anything like it in other sports in the future. I think he’s essentially right (though big events like the Oscars and the Grammys afford similar opportunities). But in an age of fragmented audiences, multiple screens, diverse interests, and countless marketing messages, those who do the best job of responding to their customers’ needs and concerns as they occur (real-time or near-to, anyway), will likely win the conversation. And the business.