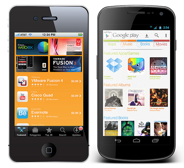 In a world dominated by smartphones, apps are the next big thing. According to online digital marketing magazine eMarketer, U.S. adults spend more media time on their mobile devices than with newspapers and magazines combined — and 2012 data from Nielsen [PDF link] found that 64 percent of mobile time is spent on apps.

It’s no wonder marketers are catching on to the benefits of in-app advertising.

Just as with online advertising, in-app ads can take several forms, including:

In-app advertising is beneficial to both marketers and app developers. On the developer/release side, app makers have the potential to earn more by releasing free apps with paid advertising, with projected total revenues exceeding $860 million by 2014. Mobile device owners are also into free apps, particularly tablet users: a study from the Online Publishers Association [PDF link] found that 54 percent of tablet owners prefer free apps with advertising, as opposed to paid apps.

Purchasing in-app advertising can be very effective, if you use strategies that don’t annoy consumers. The recall rate for app ads is higher than any other digital medium at 54 percent, with the second highest—online ads—at just 40 percent. It’s a great way to strengthen your branding and improve top-of-mind among mobile users.

How can you take advantage of this powerful marketing strategy? Here are a few tips to keep in mind:

Get creative and in-app advertising can pay off for you. How will you advertise your business to a big mobile crowd?

[Editor’s note: if you’re interested in learning more about how to use mobile for your busines, register to receive a free copy of my new special report, “Digital Hotel Marketing in a Multiscreen World,” produced in conjunction with Vizergy, here. While it’s targeted to the hospitality industry specifically, most of the lessons apply across verticals.]

You might also enjoy some of our past coverage of the social, local, mobile web, including: